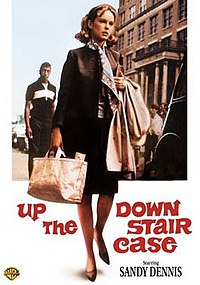 Up the Down Staircase is a 1967 American drama film directed by Robert Mulligan and starring Sandy Dennis, Patrick Bedford, Eileen Heckart, and Jean Stapleton. The plot concerns the first, trying assignment for a young, idealistic teacher. Tad Mosel wrote the screenplay adaptation of the novel of the same name by Bel Kaufman.

The film's title is a reference to the staircases inside a public, overcrowded New York City high school of 3,000 students, many of them troubled. Sylvia Barrett, fresh out of graduate school, has just been hired to teach English to the teens in this place, who come from various races and ethnicities. Many are undisciplined; a few are hanging with gangs. She is disheartened that she came to teach but finds that her time seems burdened with the school's required regulations, daily reporting and other paperwork. Her students also seem continually disruptive and playful. Student Alice has a crush on a male teacher and narrowly avoids death after jumping out a school window; Student Linda gets a black eye from her father. Student Joe is on court probation, with a high I.Q. but a mixed academic record, testing her patience; student Roy works nights and falls asleep in class. Not everyone is agreeable with Sylvia's quiet approach to the situation, but she intends to get the teens to become good students and get them into real learning. She succeeds finally in getting them into a lively discussion about classic literature (comparing "the best of times ... the worst of times" to their own lives), followed by a lively mock trial, before weighing whether to continue or resign from her position.