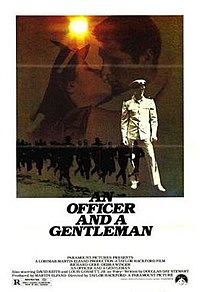 An Officer and a Gentleman 1982

An Officer and a Gentleman is a 1982 American romantic drama film starring Richard Gere, Debra Winger, and Louis Gossett Jr., who won the Academy Award for Best Supporting Actor for the film, making him the first African American male to do so. It tells the story of Zack Mayo (Gere), a United States Navy Aviation Officer Candidate who is beginning his training at Aviation Officer Candidate School. While Zack meets his first true girlfriend during his training, a young "townie" named Paula (Winger), he also comes into conflict with the hard-driving Marine Corps Gunnery Sergeant Emil Foley (Gossett Jr.) training his class.

The film begins with recent college graduate Zack Mayo preparing to report for Aviation Officer Candidate School (AOCS). He moved to the Philippines as a child to live with his father Byron, a Navy Senior Chief Boatswain's Mate, after his mother's suicide. Initially, his father is reluctant to take him in; Byron was at sea most of the time, and wasn't good at being a father even while in port. Zack had to beg not to be sent back, before Byron let him stay.