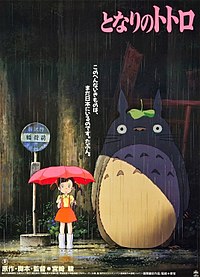 is a 1988 Japanese animated fantasy film written and directed by Hayao Miyazaki and animated by Studio Ghibli for Tokuma Shoten. The film—which stars the voice actors Noriko Hidaka, Chika Sakamoto, and Hitoshi Takagi—tells the story of a professor's two young daughters (Satsuki and Mei) and their interactions with friendly wood spirits in postwar rural Japan.

In 1950s Japan, university professor Tatsuo Kusakabe and his two daughters, Satsuki and Mei (approximately ten and four years old, respectively), move into an old house closer to the hospital where the girls' mother, Yasuko, is recovering from a long-term illness. The house is inhabited by small, dark, dust-like house spirits called susuwatari, which can be seen when moving from bright to dark places. When the girls become comfortable in their new house, the susuwatari leave to find another empty house. One day, Mei discovers two small spirits who lead her into the hollow of a large camphor tree. She befriends a larger spirit, which identifies itself by a series of roars that she interprets as "Totoro". Mei thinks Totoro is the Troll from her illustrated book Three Billy Goats Gruff, with her mispronouncing Troll. She falls asleep atop Totoro, but when Satsuki finds her, she is on the ground. Despite many attempts, Mei cannot show her family Totoro's tree. Tatsuo comforts her by telling her that Totoro will reveal himself when he wants to.