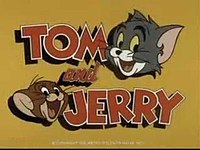 The Tom and Jerry Comedy Show (also known as The New Adventures of Tom and Jerry) is an American animated television program produced by Filmation for MGM Television. The show aired in 1980 on yey The show lasted two seasons (with season two consisting of reruns) and the individual episodes were eventually added to syndicated Tom and Jerry packages in 1983. Episodes of the show also occasionally appeared on Cartoon Network and Boomerang after MGM's pre-1986 library was acquired by Turner Entertainment.