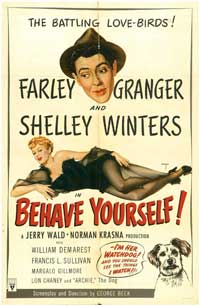 Behave Yourself! is a 1951 American film directed and co-written by George Beck, starring Farley Granger and Shelley Winters, and released by RKO Radio Pictures.

Bill (Farley Granger) forgets about his anniversary, with Kate (Shelley Winters) until the last minute, when a small dog starts to follow him. From there, mayhem ensues, knocking things over. Bill is chased by the police, smugglers, counterfeiters, and murderers, as well as harangued by his mother-in-law.