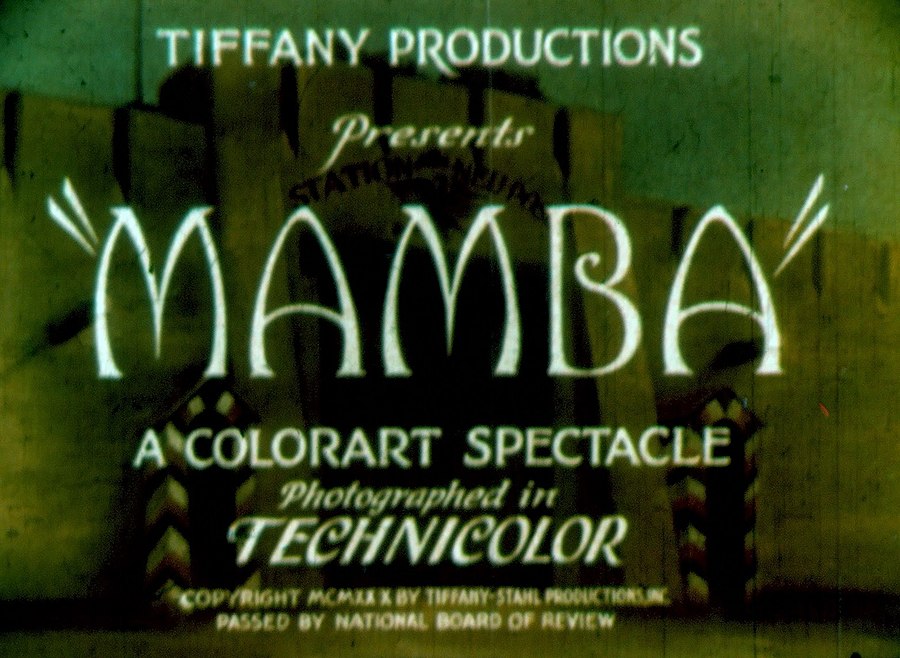 Mamba is a 1930 American pre-Code film, released by Tiffany Pictures. It was shot entirely in Technicolor and stars Jean Hersholt, Eleanor Boardman, Ralph Forbes, Josef Swickard, Claude Fleming, William Stanton and William von Brincken. It was based on a story by Ferdinand Schumann-Heink and John Reinhardt and was advertised as the First Drama In Natural Color as all previous color features in sound had featured musical numbers.

The film takes place in Neu Posen, German East Africa sometime before the First World War. "Mamba" is the name given to a South African snake. The reptile of this adventure is Auguste Bolte (played by Jean Hersholt), who is constantly reminding those with whom he has a chance to converse that he can buy anything. He neglects his appearance and does not even bother to shave or brush his hair. The German officers hold themselves aloof from him and the only individual he has an opportunity to talk to at length is his valet-secretary, a Cockney, who feeds his master with flattery. One afternoon Bolte recalls that he has received a letter asking for 200,000 marks from Count von Linden. The Count is in Germany and in a footnote it is written that Bolte might marry von Linden's daughter, Helen. The white people of the post have as little to do with Bolte as possible and the British officers across the frontier also spurn him. It occurs to Bolte that a beautiful wife would perhaps help to make life more agreeable for him. He thinks also that the officers would then overlook some of his failings and be quite impressed. He therefore allies himself to Germany.