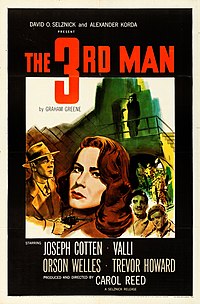 The Third Man is a 1949 British film noir directed by Carol Reed, written by Graham Greene, and starring Joseph Cotten, Alida Valli, Orson Welles, and Trevor Howard. Set in postwar Vienna, the film centers on American Holly Martins (Cotten), who arrives in the city to accept a job with his friend Harry Lime (Welles), only to learn that Lime has died. Viewing his death as suspicious, Martins elects to stay in Vienna and investigate the matter.

The American Western writer Holly Martins arrives in post–Second World War Vienna (which has been divided between the Allies: the Americans, British, French, and Soviets) seeking his childhood friend, Harry Lime, who has offered him a job. Martins is told that Lime was killed by a car while crossing the street. At Lime's funeral, Martins meets two British Royal Military Police: Sergeant Paine, a fan of Martins's books, and his superior, Major Calloway. Afterwards Martins is asked to give a lecture to a book club a few days later. He then meets a friend of Lime's, "Baron" Kurtz, who tells Martins that he and another friend, a Romanian called Popescu, carried Lime to the side of the street after the accident and, before he died, Lime asked them to take care of Martins and Lime's girlfriend, actress Anna Schmidt.