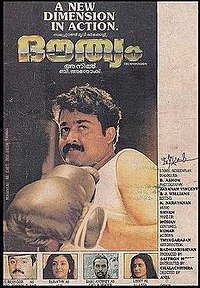 Douthyam is a 1989 Indian Malayalam-language action adventure film directed by P. Anil and written by Gayathri Ashokan. The film stars Mohanlal, Suresh Gopi, Parvathy Jayaram, and Babu Antony. The film attracted media attention for the action subject as the script was done by the poster designer Gayathri Ashokan. Douthyam was almost completely shot in forest. The film was well received and became a blockbuster at the box office.

An army aircraft crashes in dense forest. Captain Roy Jacob (Mohanlal), starts his mission to rescue his colleagues from the dense forest, but he had to fight against a terrorist group hiding in the forest, moreover has to recover some confidential documents as well.