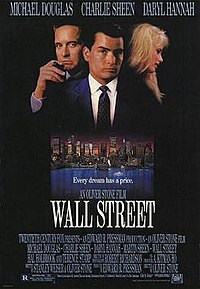 In 1985, Bud Fox is a junior stockbroker at Jackson Steinem & Co. in New York City. He wants to work with his hero, Gordon Gekko, a legendary Wall Street player. After calling Gekko's office 59 days in a row trying to land an appointment, Bud visits Gekko on his birthday with a box of Gekko's favorite, contraband Cuban cigars. Impressed at his boldness, Gekko grants Bud an interview. Bud pitches him stocks, but Gekko is unimpressed. Desperate, Bud provides him some inside information about Bluestar Airlines, which he has learned in a casual conversation with his father, Carl, leader of the company's maintenance workers' union. Intrigued, Gekko tells Bud he will think about it. A dejected Bud returns to his office. However, Gekko places an order for Bluestar stock and becomes one of Bud's clients.