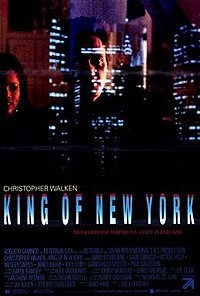 Frank White, a drug lord, is riding into New York City in a limousine after being released from Rikers Island. Emilio El Zapa, a Colombian drug dealer, is shot dead and the killers leave a newspaper headline announcing Frank's release. Zapa's partner, King Tito, is in a hotel room with Jimmy Jump, who is Frank's trigger happy right-hand man and Test Tube, who are negotiating the purchase of cocaine. Jimmy and Test Tube shoot Tito and his bodyguards and steal the cocaine.