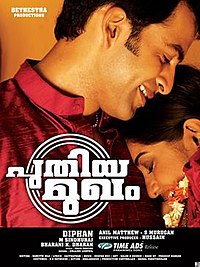 Puthiya Mukham is a 2009 Indian Malayalam-language action-drama film directed by Diphan and written by M. Sindhuraj.The film stars Prithviraj Sukumaran, Bala, Priyamani, Meera Nandan and Nedumudi Venu in the lead roles. The film was shot at locations in Kochi, Thrissur, Palakkad, and Malaysia.The film's original background score and soundtrack was composed by Deepak Dev. The film was a major commercial success at the box office and was noted for heightening the stardom of Prithviraj in Malayalam film industry. The film was dubbed in Tamil with the same name, and was remade in Kannada as Ziddi.

Krishnakumar (Prithviraj Sukumaran) is a resident of an agraharam in Kalpathy. Along with his studies, he pursues a career as a percussionist and teaches the mridangam to local students. He is in love with a girl who is the daughter of a family friend. Their relationship is not only approved, but also supported by both families.