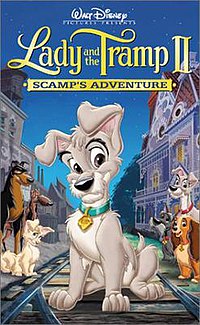 Lady and the Tramp II: Scamp's Adventure is a 2001 American animated direct-to-video musical romance film produced by Walt Disney Television Animation, and the sequel to the 1955 Disney animated film Lady and the Tramp. It was released on February 27, 2001, 46 years after its predecessor.

In 1911, just two days before the Fourth of July, Lady and Tramp have three polite and well-behaved daughters, Annette, Danielle, and Collette, and a very playful but rambunctious son named Scamp. After Scamp makes a mess in the house, Jim Dear chains Scamp to the doghouse outside as punishment. Lady and Tramp are distraught that their son cannot settle down and follow house rules. The Tramp tries to reason with Scamp, but gets angry at his son's insistent desire to be a wild dog. Later, Scamp sees a pack of stray dogs, named the Junkyard Dogs, harassing the dogcatcher outside the yard and becomes intrigued. Scamp breaks free from his chain and runs off to find the pack. He meets a young member of the pack, Angel, and, after a flirtatious introduction, she takes him to the rest of the Junkyard Dogs. Meanwhile, Lady comes outside to reconcile with her son but is horrified to see that he has disappeared. Panicking, she rushes back in and alerts Tramp and the Darlings start a search party.