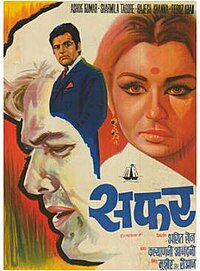 Safar (English: Journey) is a 1970 Indian Hindi film produced by the Mushir-Riaz duo and directed by Asit Sen, based on a novel by Bengali writer Ashutosh Mukherjee. The film stars Ashok Kumar, Rajesh Khanna, Sharmila Tagore and Feroz Khan in lead roles. The film became the tenth top-grossing production of the year. It won one Filmfare Awards and four BFJA Awards. Rajesh Khanna received a nomination for BFJA Awards for Best Actor (Hindi). Asit Sen remade the 1956 Bengali film Chalachal, which was directed by him, in Hindi as Safar (1970). As per review by critics, Safar was carried more than ably by Khanna's immense charm at the peak of his popularity. Rajesh Khanna beautifully conveys his character's desperation and his conviction that surviving by a slender thread is not really living. This film is counted among the 17 consecutive hit films of Rajesh Khanna between 1969 and 1971, by adding the two-hero films Marayada and Andaz to the 15 consecutive solo hits he gave from 1969 to 1971.

The movie starts with the desperate attempt of surgeon Dr. Neela (Sharmila Tagore) to save a patient, whom she knew wasn't going to survive. She works under the guidance of Dr. Chandra (Ashok Kumar), who tells her that however hard doctors might try, sometimes a patient wouldn't survive. The story drifts into a flashback. Neela meets Avinash (Rajesh Khanna) at medical college and after an initial misunderstanding, grows close to him. Avinash is a poor guy who works while attending medical college. He paints too and Neela finds out that most of his paintings are of her. Though he admires Neela very much, he never talks about love or marriage. Everyone thinks that it's because of his financial status, but it is later revealed that he has terminal cancer.