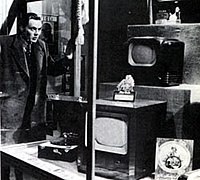 Meet Mr. Lucifer is a black and white British comedy satire film released in 1953 starring Stanley Holloway. It was filmed at Ealing Studios, London, and is one of the Ealing Comedies. The film is based on the play Beggar My Neighbour by Arnold Ridley (who later played Private Godfrey in the BBC television comedy series Dad's Army). The film opened on 26 November 1953 at the Haymarket Gaumont cinema in London.

When Mr Pedelty (Joseph Tomelty) leaves his firm, he is given a television set as a retirement present. At first he enjoys all the attention from his neighbours, but soon the attraction wears off, and he sells it on to a young married couple the Nortons (Jack Watling and Peggy Cummins) living in the flat above him. They soon encounter the same problems, and again the set is passed on to several different characters all with the same results.