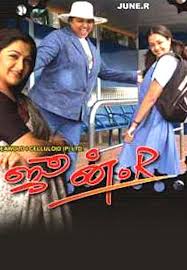 June R is a 2006 Indian Tamil-language drama film directed by Revathy Varmha. The film stars Jyothika in the title role which was her 25th Tamil film along with the supporting cast Khushbu Sundar, Saritha and Biju Menon. The film's soundtrack are composed by Malayalam composer Sharreth, while Madhu Ambat was the cinematographer. The film opened in February 2006 to poor reviews and declared as disaster at box office. The Hindi remake of the film, Aap Ke Liye Hum, remains unreleased.

June R (Jyotika), an orphan, was born in the month of June, for which she was named. She works in an advertising agency. One day she happens to come across a middle-aged woman (Saritha) hurt badly in an accident. She admits her in hospital and tells the doctor that it is her mother Rajalakshmi in order to save her life from the regular hierarchical rules of the hospital. Coming to Rajalakshmi (named by June) who happens to be Mrs. Raniammal, a widowed woman who strives to bring up her only son Arun (Biju Menon) whereas Arun smitten by his wife's words for the wealth and money of his mother, plans to send her away from his home to an orphanage in order to settle with his wife in New York City. Deeply hurt, Raniammal finds solace in June's company, who also longs for a motherly love since childhood. June decides to take Rajalakshmi to her house and calls her mom. Both together (June and Rajalakshmi) cherish life who once were starved for love. later her son comes back again to take his mother back, Rajalakshmi realising her sons evil thoughts refuses to get back to him. later on Rajalakshmi's refusal he visits June and quarrels with her to give back his mother, June baffles with his sudden love for his mother. this implies an emotional entangle between the both meanwhile Rajalakshmi falls sick and June on seeing Raniammal's pathetic condition brings her brother (Ravikumar) whom she wanted to meet before she dies. On visiting Rajalakshmi's home town she unveils the mystery behind his sudden love for his mother. now entrant Amudha (Khushbu Sundar) a noted and leading lawyer aids June to get back her new mother legally, prostrating Arun's wicked thoughts in the law of court . at last the judgement favours June though June succeeds in her mission of getting back her mother, but fate has some storm in its store, June finds Rajalakshmi dead when she comes back. Now comes Raja (Suriya), a rich client of June's advertising agency falls in love with her who consoles her on this uncompensable loss and takes her along with him, just the way her mother Rajalakshmi wished.