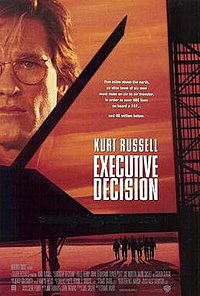 Executive Decision is a 1996 American action thriller film directed by Stuart Baird in his directorial debut, and starring Kurt Russell, Steven Seagal, Halle Berry, Oliver Platt, David Suchet and John Leguizamo. It was released in the United States on March 15, 1996, and grossed $122 million against a $55 million budget.

Lieutenant Colonel Austin Travis leads an unsuccessful Special Forces raid on a Chechen mafia safe house in Italy to recover a stolen Soviet nerve agent, DZ-5. During the raid one of his team is killed, and the nerve agent is found to be missing, leaving the mission a bust.