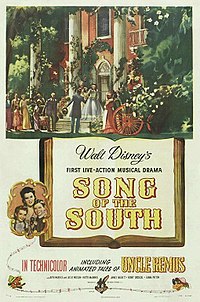 Song of the South is a 1946 American live-action/animated musical drama film produced by Walt Disney and released by RKO Radio Pictures. It is based on the collection of Uncle Remus stories as adapted by Joel Chandler Harris, and stars James Baskett as Uncle Remus. The film takes place in the southern United States during the Reconstruction era, a period of American history after the end of the American Civil War and the abolition of slavery. The story follows seven-year-old Johnny (Bobby Driscoll) who is visiting his grandmother's plantation for an extended stay. Johnny befriends Uncle Remus, one of the workers on the plantation, and takes joy in hearing his tales about the adventures of Br'er Rabbit, Br'er Fox, and Br'er Bear. Johnny learns from the stories how to cope with the challenges he is experiencing while living on the plantation.

Seven-year-old Johnny is excited about what he believes to be a vacation at his grandmother's Georgia plantation with his parents, Sally and John Sr. When they arrive at the plantation, he discovers that his parents will be living apart temporarily, and he will live at the plantation with his mother and grandmother while his father returns to Atlanta to continue his controversial editorship of that city's newspaper. Distraught at his father's departure, Johnny secretly leaves for Atlanta that night with only a bindle.