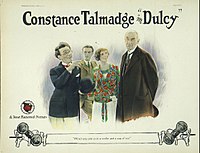 Dulcy is a 1923 American silent comedy film directed by Sidney A. Franklin and starring Constance Talmadge. The film was adapted from the Broadway production of the same name written by George S. Kaufman and Marc Connelly. The play opened in New York in August 1921 and ran for 241 performances. The film is now considered to be lost.