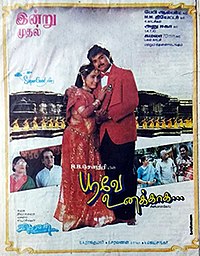 Poove Unakkaga is a 1996 Indian Tamil-language romantic comedy film written and directed by Vikraman. The film starred Vijay and Sangita in the lead roles. Actor Murali makes a guest appearance in a song in the film. It was the first blockbuster in Vijay's career and a major breakthrough for him. The film was remade in Telugu as Subhakankshalu (1997), in Kannada as Ee Hrudaya Ninagagi (1997) and in Hindi as Badhaai Ho Badhaai (2002). It was also dubbed in Hindi as Manzil Pyaar Ki (2016).

Sadasivam and Stephen were family friends for generations until the time when Sadhasivam's daughter Janaki falls in love with Stephen's son Robert. The couple elope and get married against both families' wishes which leads both families to abandon them. Also enmity is created between the two families and they hate each other. Vasudevan is the son of Sadhasivam and Moses is the son of Stephen.