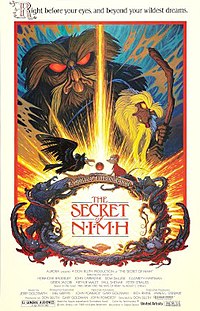 The Secret of NIMH is a 1982 American animated dark fantasy adventure film directed by Don Bluth in his directorial debut. It is an adaptation of Robert C. O'Brien's 1971 children's novel Mrs. Frisby and the Rats of NIMH. The film was produced by Aurora Productions and released by MGM/UA Entertainment Company for United Artists and features the voices of Elizabeth Hartman, Dom DeLuise, Arthur Malet, Derek Jacobi, Hermione Baddeley, John Carradine, Peter Strauss, and Paul Shenar. The "Mrs. Frisby" name in the novel had to be changed to "Mrs. Brisby" during production due to trademark concerns with Frisbee discs. It was followed in 1998 by a direct-to-video sequel called The Secret of NIMH 2: Timmy to the Rescue, which was made without Bluth's involvement or input. In 2015, a CGI/live-action remake was reported to be in the works.

Mrs. Brisby, a widowed field mouse, lives in a cinder block with her children in a field on the Fitzgibbons' farm. She prepares to move her family out of the field as plowing time approaches, but her son Timothy has fallen ill. She visits Mr. Ages, another mouse and friend of her late husband, Jonathan. Mr. Ages diagnoses Timothy with pneumonia, provides her with medicine, and warns her that Timothy must stay inside for at least three weeks or he will die. On her way home, she encounters Jeremy, a clumsy but friendly crow. They both narrowly escape from the Fitzgibbons' cat, Dragon.