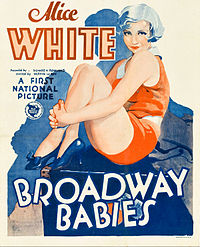 Broadway Babies, aka Broadway Daddies (UK) and Ragazze d'America (Italy), is a 1929 all-talking Pre-Code black and white American musical film produced and distributed by First National Pictures, a subsidiary of Warner Brothers. The film was directed by Mervyn LeRoy and starred Alice White and Charles Delaney. This was White's first sound film with dialogue.

Chorus girl Delight "Dee" Foster (Alice White) is in love with stage manager Billy Buvanny (Charles Delaney) and he also loves her. They plan to marry until bootlegger Perc Gessant (Fred Kohler) steps in. Dee is led to believe that Billy is in love with another girl, so she agrees to play around with Gessant when he becomes interested in her. When Gessant proposes marriage, Dee accepts. As they are about to be married, rival gangsters shoot Gessant and he ends up dying. Dee is reconciled with Billy and they become engaged.