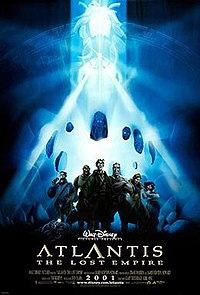 Atlantis: The Lost Empire is a 2001 American animated science-fantasy action-adventure film created by Walt Disney Feature Animation, marking the 41st entry in Disney's animated features canon and its first science-fiction film. Written by Tab Murphy, directed by Gary Trousdale and Kirk Wise, and produced by Don Hahn, the film features an ensemble cast with the voices of Michael J. Fox, Cree Summer, James Garner, Leonard Nimoy, Don Novello, Phil Morris, Claudia Christian, Jacqueline Obradors, Jim Varney (in his final role), Florence Stanley, John Mahoney, David Ogden Stiers and Corey Burton. Set in 1914, the film tells the story of a young man who gains possession of a sacred book, which he believes will guide him and a crew of mercenaries to the lost city of Atlantis.

A massive tidal wave, triggered by a distant explosion, threatens to drown the island kingdom of Atlantis. In the midst of an evacuation from the capital city, the Queen of Atlantis is caught by a strange, hypnotic blue light and lifted up into the "Heart of Atlantis", a powerful crystal protecting the city. The crystal consumes her and creates a dome barrier that protects the city's innermost district. She leaves behind her husband, the King of Atlantis, and her young daughter, Princess Kida, as the island sinks beneath the ocean.