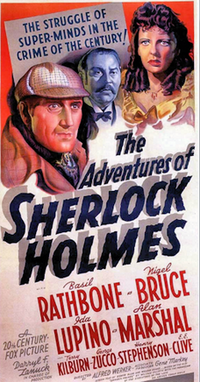 The Adventures of Sherlock Holmes 1939

The Adventures of Sherlock Holmes (released theatrically as Sherlock Holmes in the United Kingdom) is a 1939 mystery-adventure film released by Twentieth Century Fox. It is a pastiche featuring the characters of the Sherlock Holmes series of books written by Sir Arthur Conan Doyle. The film credits the 1899 play, Sherlock Holmes by William Gillette as the source material for the movie script, though there is little resemblance in the plots.

The film is set in 1894. The picture begins with Moriarty and Holmes verbally sparring on the steps outside the Old Bailey, where Moriarty has just been acquitted on a charge of murder owing to lack of evidence. Holmes remarks, "You have a magnificent brain, Moriarty. I admire it. I admire it so much I'd like to present it, pickled in alcohol, to the London Medical Society." "It would make an impressive exhibit," replies Moriarty.