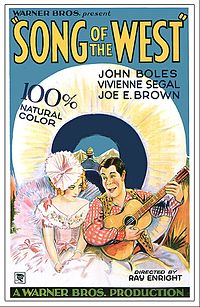 Song of the West (1930) is an American Pre-Code musical operetta film produced by Warner Bros., and photographed entirely in Technicolor. It was based on the 1928 Broadway musical Rainbow by Vincent Youmans (music), Oscar Hammerstein II (lyrics) and Laurence Stallings (book). It starred John Boles, Joe E. Brown and Vivienne Segal, and was the first all-color all-talking feature to be filmed entirely outdoors.

The story takes place in 1849. Captain Stanton (John Boles) has been cited for a court martial because of a misunderstanding over a woman with Major Davolo. As a scout, he is sent to escort a wagon train which is under military escort. It turns out that this escort is his own former regiment. When he meets Davolo, there is another fight between Stanton and Davolo in which Davolo is killed.