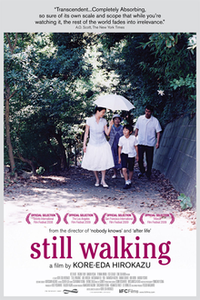 is a 2008 Japanese film edited, written, and directed by Hirokazu Kore-eda. The film is a portrait of a family over roughly 24 hours as they commemorate the death of the eldest son. The film was widely praised by critics and won the Golden Astor for Best Film at the 2008 Mar del Plata International Film Festival.

The Yokoyama family come together every year to commemorate the death of the eldest son, Junpei, who accidentally drowned 12 years ago while saving the life of a boy. His father Kyohei, a retired doctor, and mother Toshiko are joined by their surviving son Ryota, who has recently married a widow (Yukari) with a young son (Atsushi), and their daughter Chinami, her husband and their children. Ryota resents knowing that Junpei was the favorite son, whose belongings are still left untouched by Toshiko, and that his parents attribute positive memories of him to Junpei; a bitter Kyohei, who is still mourning his son, has always been disappointed that Ryota went into art restoration instead of becoming a doctor and taking over the family business like Junpei. Meanwhile, Chinami pushes the idea of moving her family in with her ageing parents in order to take care of them.