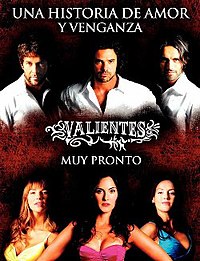 Valientes (in Spanish, "The braves") is a telenovela from Argentina, aired by Canal 13 at the prime time and produced by Pol-Ka. Main actors are Luciano Castro, Julieta Díaz and Arnaldo André, and it is one of the most successful TV programs from Argentina of 2009. With a daily rating of nearly 27,4 points, it is the most successful production of Pol-Ka. It run from February 2009 to 2010. From April 16, 2010 the show was airing in Slovakia on JOJ Plus but due the poor ratings it was cancelled after 48 episodes, the rest of the episodes start broadcast on JOJ Plus from March 6, 2012 taking the slot at 4 AM.

The main idea of the telenovela is a plot of revenge by 3 brothers who used to live in the countryside, whose father was ruined by a businessman who took his farms. For this purpose they move to Buenos Aires and work near him, in order to become his friends and confidants, and avenge his father by sabotaging his political career. The love stories of the show torn the characters between their sentiments and their loyalty to the plan.