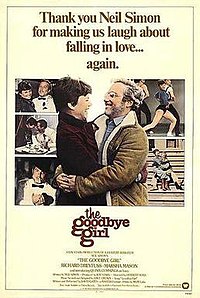 The Goodbye Girl is a 1977 American romantic comedy-drama film produced by Ray Stark, directed by Herbert Ross and starring Richard Dreyfuss, Marsha Mason, Quinn Cummings and Paul Benedict. The original screenplay by Neil Simon centers on an odd trio: a struggling actor who has sublet a Manhattan apartment from a friend, the current occupant (his friend's ex-girlfriend, who has just been abandoned), and her precocious young daughter.

Dancer Paula McFadden (Marsha Mason) and her ten-year-old daughter Lucy (Quinn Cummings) live in a Manhattan apartment with her married boyfriend, Tony DeForrest, until one day, he deserts her to go and act in a film in Italy. Before he left and unknown to Paula, Tony subleased the apartment to Elliot Garfield (Richard Dreyfuss), a neurotic but sweet aspiring actor from Chicago, who shows up in the middle of the night expecting to move in. Though Paula is demanding and also neurotic, and makes clear from the start that she doesn't like Elliot, he allows her and Lucy to stay.