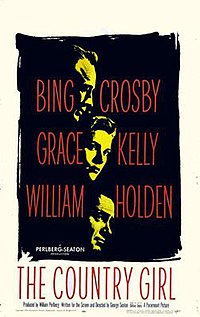 The Country Girl is a 1954 American drama film directed by George Seaton and starring Bing Crosby, Grace Kelly, and William Holden. Adapted by Seaton from Clifford Odets' 1950 play of the same name, the film is about an alcoholic has-been actor/singer struggling with the one last chance he has been given to resurrect his career. Seaton won the Academy Award for Best Writing, Adapted Screenplay. It was entered in the 1955 Cannes Film Festival.

In a theatre, auditions are being held for a new musical production. Director Bernie Dodd (William Holden) watches a number performed by fading star Frank Elgin (Bing Crosby) and suggests that he be cast in the leading role. This is met with strong opposition from Cook, the show's producer.