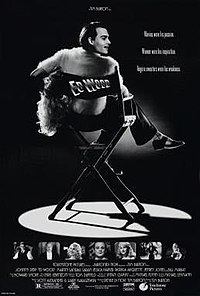 Ed Wood is a 1994 American biographical comedy-drama film directed and produced by Tim Burton and starring Johnny Depp as the eponymous cult filmmaker. The film concerns the period in Wood's life when he made his best-known films as well as his relationship with actor Bela Lugosi, played by Martin Landau. Sarah Jessica Parker, Patricia Arquette, Jeffrey Jones, Lisa Marie, and Bill Murray are among the supporting cast.

In 1952, Ed Wood is struggling to enter the film industry. Upon hearing of an announcement in ''Variety'' magazine that producer George Weiss is trying to purchase Christine Jorgensen's life story, Wood wants to meet Weiss. Weiss explains that Varietys announcement was a news leak, and it is impossible to purchase Jorgensen's rights. The producer decides to fictionalize the film, titled I Changed My Sex!. Wood tries to convince Weiss that he is perfect to direct the film, owing to the fact that he himself is a closeted transvestite and knows what it is like to live with a secret and worry what people might think, but is unsuccessful since Weiss wants a director with experience. Wood meets his longtime idol Bela Lugosi and the two become friends. Wood persuades Weiss to let him direct the film by convincing him that having a star in the film would sell tickets, and they could sign Lugosi for a low price.