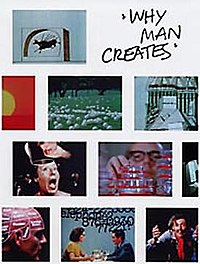 Why Man Creates is a 1968 animated short documentary film that discusses the nature of creativity. It was written by Saul Bass and Mayo Simon, and directed by Saul Bass. It won the Oscar for Best Documentary Short Subject. An abbreviated version of it ran on the first broadcast of CBS' 60 Minutes on September 24, 1968.