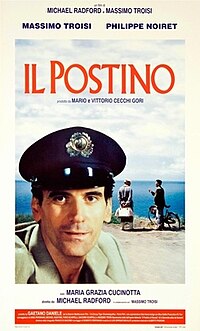 Il Postino: The Postman (; the title used for the original US release) is a 1994 comedy-drama film co-written by and starring Massimo Troisi and directed by English filmmaker Michael Radford. Based on the 1985 novel Ardiente paciencia (English translation: "Burning Patience") by Antonio Skármeta, itself adapted from a 1983 film written and directed by Skármeta, the film tells a fictional story in which the real life Chilean poet Pablo Neruda forms a friendship with a simple Procida postman (Troisi) who learns to love poetry. The cast includes Troisi, Philippe Noiret, and Maria Grazia Cucinotta. The screenplay was adapted by Radford, Troisi, Anna Pavignano, Furio Scarpelli, and Giacomo Scarpelli.

In 1950, Pablo Neruda, the famous Chilean poet, is exiled to a small island in Italy for political reasons. His wife accompanies him. On the island, a local, Mario Ruoppolo, is dissatisfied with being a fisherman like his father. Mario looks for other work and is hired as a temporary postman, with Neruda as his only customer. He uses his bicycle to hand deliver Neruda's mail. (The island seems to have no cars). Though poorly educated, the postman eventually befriends Neruda and becomes further influenced by Neruda's political views and poetry.