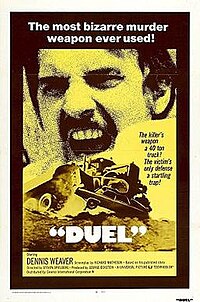 Duel is a 1971 American action thriller film written by Richard Matheson, which is based on his own 1971 short story. The film marks the feature-length directorial debut of Steven Spielberg and was distributed by Universal Pictures.

David Mann is a middle-aged salesman driving on a business trip. He encounters a dilapidated tanker truck in the Mojave Desert. Mann passes the truck but the truck speeds up and roars past him. When Mann overtakes and passes it again, the truck blasts its horn. Mann leaves it in the distance.