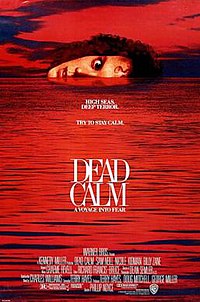 Dead Calm is a 1989 Australian psychological thriller film directed by Phillip Noyce and starring Sam Neill, Nicole Kidman and Billy Zane. The screenplay by Terry Hayes was based on the 1963 novel of the same name by Charles Williams; the film represents the first successful film adaptation of the novel after Orson Welles struggled for years to complete his own film based on it titled The Deep. Filmed around the Great Barrier Reef, the plot focuses on a married couple, who, after tragically losing their son, are spending some time isolated at sea, when they come across a stranger who has abandoned a sinking ship.

Rae Ingram (Nicole Kidman) is involved in a car crash which results in the death of her son. Her older husband, Royal Australian Navy officer John Ingram (Sam Neill), suggests that they help deal with their grief by heading out for a vacation alone on their yacht. In the middle of the Pacific, they encounter a drifting schooner that seems to be taking on water. A man, Hughie Warriner (Billy Zane), rows over to the Ingrams' yacht for help. He claims that his ship is sinking and that his companions have all died of food poisoning.