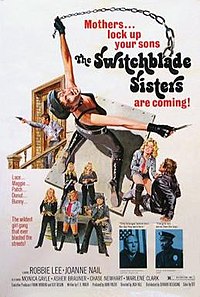 Switchblade Sisters is a 1975 action and exploitation film detailing the lives of high school-aged female gang members. It was directed by Jack Hill and stars Joanne Nail, Robbie Lee and Monica Gayle. The film is also known as The Jezebels, Maggie's Stiletto Sisters, and The Warriors II: Las Navajeras.

Maggie (Joanne Nail) transfers from across town to a new high school that is essentially run by the Silver Daggers, a rough, hierarchical male gang, and their female counterparts, the Dagger Debs. A confrontation between the Dagger Debs and a repo man gets all the female members — and Maggie — arrested. Because Maggie is new, a lecherous lesbian warden at the juvenile detention center (Kate Murtagh) threatens to physically abuse her. Maggie fights back and eventually the Dagger Debs join her. Subsequently, Dagger Deb leader Lace (Robbie Lee) decides she likes Maggie and entrusts her with running errands while she serves a brief sentence in juvenile hall. One such errand-delivering a love note to Lace's boyfriend, Dominic (Asher Brauner), ends in Dominic following Maggie home and raping her. Maggie's close friendship with Lace upsets Lace's closest friend, Patch, who lost one of her eyes in service to the gang and now sees herself as second-in-command.