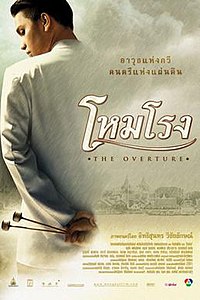 The Overture ( or Hom rong) is a 2004 Thai tragic-nostalgia music-drama film. A fictionalised account based on the life story of Thai palace musician Luang Pradit Phairoh (Sorn Silapabanleng), it follows the life of a Thai classical musician from the late 19th century to the 1940s. The film was the winner of several awards in Thailand and was the country's official selection for the Academy Award for Best Foreign Language Film. It was directed by Ittisoontorn Vichailak and producers included Nonzee Nimibutr and Chatrichalerm Yukol. The film was also credited with a revival in the popularity of piphat – Thai classical music. In 2015, this film had been remade into a musical play from the 4th of April to 17 May at KBank Siam Pic-Ganesha Theatre.

Starting out in the 1940s, the story finds the elder Sorn bed-ridden. To an old friend, he recalls his childhood growing up in 1880s Siam, during the reign of King Chulalongkorn and the action flashes back to that time.