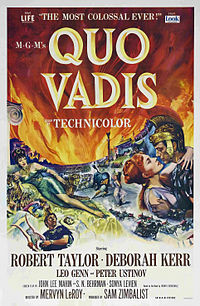 Quo Vadis (Latin for "Where are you going?") is a 1951 American epic film set in ancient Rome during the final years of Emperor Nero's reign, based on the 1896 novel of the same title by Polish Nobel Laureate author Henryk Sienkiewicz. Produced by Metro-Goldwyn-Mayer and filmed in Technicolor, it was directed by Mervyn LeRoy from a screenplay by S. N. Behrman, Sonya Levien, and John Lee Mahin. It is the fourth screen adaptation of Sienkiewicz's novel. The film stars Robert Taylor, Deborah Kerr, Leo Genn, and Peter Ustinov, and features Patricia Laffan, Finlay Currie, Abraham Sofaer, Marina Berti, Buddy Baer, and Felix Aylmer. Future Italian stars Sophia Loren and Bud Spencer appeared as uncredited extras. The score is by Miklós Rózsa and the cinematography by Robert Surtees and William V. Skall.

Marcus Vinicius is a Roman military commander and the legate of the XIV Gemina. Returning from wars in Britain and Gaul, he falls in love with Lygia, a devout Christian; in spite of this, he continually tries to win her affections. Though she grew up as the foster daughter of Aulus Plautius, a retired Roman general, Lygia is legally a Lygian hostage of Rome in the old general's care. Petronius, Marcus' uncle, persuades Nero to give her to his nephew as a reward for his services. Lygia resents this arrangement, but eventually falls in love with Marcus.