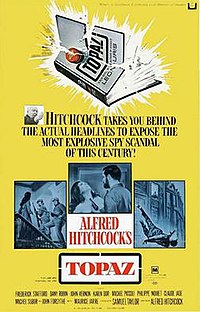 Topaz is a 1969 American espionage thriller film directed by Alfred Hitchcock. Based on the 1967 Cold War novel Topaz by Leon Uris, the film is about a French intelligence agent who becomes entangled in the Cold War politics of before the 1962 Cuban Missile Crisis and then the breakup of an international Soviet spy ring in France. The story is loosely based on the 1962 Sapphire Affair, which involved the head of France's SDECE in the United States, the spy Philippe Thyraud de Vosjoli, a friend of Uris, who played an important role in "helping the U.S. discover the presence of Russian offensive missiles in Cuba."

In Copenhagen in 1962, a high-ranking Soviet intelligence officer, Boris Kusenov (Per-Axel Arosenius), defects to the West. During debriefing, CIA agent Mike Nordstrom (John Forsythe) learns that Soviet missiles with nuclear warheads will be placed in Cuba.