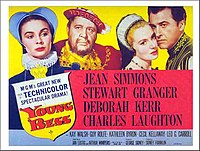 Young Bess is a 1953 Technicolor biographical film made by Metro-Goldwyn-Mayer about the early life of Elizabeth I, from her turbulent childhood to the eve of her accession to the throne of England. It stars Jean Simmons as Elizabeth and Stewart Granger as Thomas Seymour, with Charles Laughton as Elizabeth's father, Henry VIII, a part he had played 20 years before in The Private Life of Henry VIII. The film was directed by George Sidney and produced by Sidney Franklin, from a screenplay by and Arthur Wimperis based on the novel of the same title by Margaret Irwin (1944).

Following the execution of her mother, Anne Boleyn (Elaine Stewart), for infidelity, King Henry VIII (Charles Laughton) exiles the child Elizabeth (Noreen Corcoran) to Hatfield House, after declaring her illegitimate and removing her from eligible succession to the throne. Over the years, her position rises and falls according to the whims of her father. The child is periodically summoned to return to London to become acquainted with each of Henry's latest spouses. When Henry marries his last wife, Catherine Parr (Deborah Kerr), the now-teenage Elizabeth (Jean Simmons) rebels against her latest summons but is persuaded by the handsome, tactful Lord Admiral Thomas Seymour (Stewart Granger) to change her mind. She meets Catherine, and the two become good friends. Meanwhile, Henry is impressed and amused by the resolute defiance of his daughter, and he declares her once again a legitimate heiress to the crown.