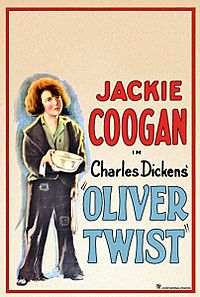 During the 1830s, in a country workhouse somewhere in England, a very young woman outcast of unknown history dies giving birth to a boy. Nine years later, the boy in particular who has been given the unlikely name of Oliver Twist by the cruel parish beadle Mr. Bumble, after losing out in a secret draw with the other orphan boys, gets into trouble with the workhouse authorities for daring to asking for more supper - if you can call one pathetically small bowlful of gruel a supper. As a result, Mr. Bumble apprentices him off to Mr. Sowerberry, an uncaring undertaker who mistreats the boy so badly that one day he rebels for the first time in his life, then runs away to London to seek his fortune. Shortly afterwards, Mr. Bumble is summoned to a private meeting with a sinister man calling himself Monks who inquires information about Oliver, and easily bribes the greedy official into yielding him a gold locket that was the only thing of value found on Oliver's mother after her death, as well as the only proof that she along with her son are actually from a wealthy family. Monks charges Mr. Bumble to remain silent about their transaction and goes on to London to track Oliver down.