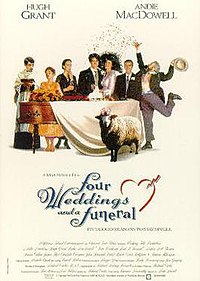 Four Weddings and a Funeral 1994

Four Weddings and a Funeral is a 1994 British romantic comedy film directed by Mike Newell. It was the first of several films by screenwriter Richard Curtis to feature Hugh Grant, and follows the adventures of Charles (Grant) and his circle of friends through a number of social occasions as they each encounter romance. Andie MacDowell stars as Charles's love interest Carrie, with Kristin Scott Thomas, James Fleet, Simon Callow, John Hannah, Charlotte Coleman, David Bower, Corin Redgrave, and Rowan Atkinson in supporting roles.

At the wedding of Angus and Laura in Somerset, the unmarried best man Charles, his flatmate Scarlett; his friend Fiona and her brother Tom; Gareth, a gay man, and his Scottish lover Matthew; and Charles's deaf-mute brother David endure the festivities. At the reception, Charles becomes smitten with Caroline (Carrie), a beautiful young American, and the two spend the night together. In the morning, Carrie jokingly demands that Charles propose to her, observing that they may have "missed a great opportunity", and then leaves for America.