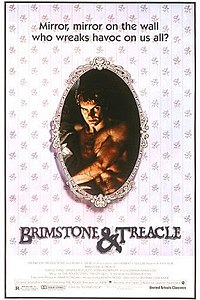 Brimstone and Treacle is a 1976 BBC television play by Dennis Potter. Originally intended for broadcast as an episode of the Play for Today series, it remained untransmitted until 1987. The play was made into a film version (released in 1982) co-starring Sting. Both versions star Denholm Elliott.

For two years, Tom and Amy Bates have been struggling to cope with their altered lives, after their daughter Pattie (or Patricia) was severely injured in a hit-and-run accident. Pattie is unable to walk, completely dependent upon others for the activities of daily living, and seemingly unable to communicate beyond making unintelligible sounds. Although poorly educated and gullible, Amy firmly believes that Pattie is able to understand what is being said in her presence, whereas Tom has given up all hope of her recovery. In fact, judging from the sounds she makes, Pattie seems to realise what is going on around her, but Tom is beyond noticing.