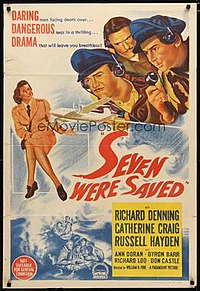 Seven Were Saved (also known as S.O.S. Rescue) is a 1947 American film directed by William H. Pine and starring Richard Denning, Catherine Craig and Russell Hayden. The film's opening title says: "This film is dedicated to the men of the AAF Air-sea rescue service, who risk their lives daily that others may live." Seven Were Saved was the first of a number of films that dramatized survival at sea after an aircraft crash.

In 1945, several months after the end of World War II, Army nurse Susan Briscoe is taking an amnesia victim, who was imprisoned by the Japanese, to the United States via transport aircraft, piloted by Captain Allen Danton. The passengers include the Japanese Colonel Yamura, who is on his way to Manila to face war crime charges. Also on board is a couple, the Hartleys, who were married on the day they were liberated from a Japanese prison camp.