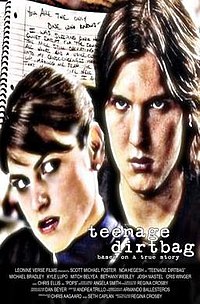 Teenage Dirtbag is a 2009 drama film written and directed by Regina Crosby and starring Scott Michael Foster and Noa Hegesh. The film is distributed by Vivendi Entertainment and Lightyear Entertainment.

At a local IGA store, a pregnant woman is shocked to learn from an old classmate that a boy she once knew named Thayer died in a river recently. When going back to her car, the woman has a flashback of her time in high school.