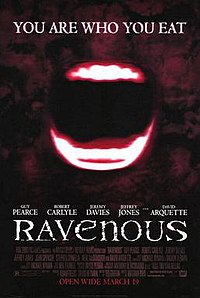 Ravenous is a 1999 Western horror film directed by Antonia Bird and starring Guy Pearce, Robert Carlyle, Jeffrey Jones and David Arquette. The film revolves around cannibalism in 1840s California and some elements bear similarities to the story of the Donner Party and that of Alferd Packer. Screenwriter Ted Griffin lists Packer's story, as recounted in a couple of paragraphs of Dashiell Hammett's The Thin Man, as one of his inspirations for Carlyle's character.

During the Mexican–American War, Second Lieutenant John Boyd, who is fighting in the United States Army, finds his courage fail him in battle and plays dead as his unit is massacred. His body, along with the other dead are put in a cart and hauled back to the Mexican headquarters. However, in a moment of bravery, Boyd seizes the chance to capture the Mexican headquarters. His heroism earns him a captain's promotion, but when General Slauson learns of the cowardice through which victory was achieved, he posts Boyd into exile at Fort Spencer, a remote military outpost high in the Sierra Nevada commanded by the weary but genial Colonel Hart, and staffed by a motley array of misfits; the pious Private Toffler, the drug-addicted Private Cleaves, the drunken Major Knox and the ferocious Private Reich, in addition to the Native American scout George and his sister Martha.