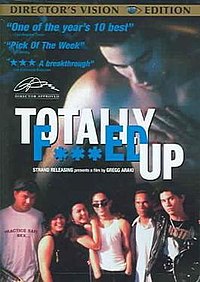 Totally Fucked Up (censored title Totally F***ed Up in many references and publicity material) is a 1993 American drama film written and directed by Gregg Araki. The first installment of Araki's Teenage Apocalypse Trilogy, it is considered a seminal entry in the New Queer Cinema genre.

The plot is concerned with six teenagers, four of whom are gay men, the other two a "traditional" lesbian couple. The plot is spliced with segments of other material and occasional tangents not central to the plot, but it mainly follows a linear structure. Araki has constructed the film in 15 parts, which is described in the opening titles.