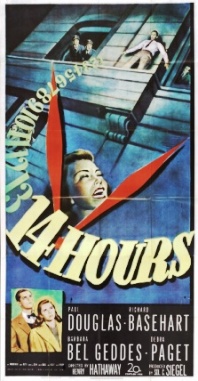 Fourteen Hours is a 1951 American film noir drama directed by Henry Hathaway, which tells the story of a New York City police officer trying to stop a despondent man from jumping to his death from the 15th floor of a hotel.

Early one morning, a room-service waiter at a New York City hotel is horrified to discover that the young man to whom he has just delivered breakfast is standing on the narrow ledge outside his room on the 15th floor. Charlie Dunnigan, a policeman on traffic duty in the street below, tries to talk him off the ledge to no avail. He is ordered back to traffic patrol by NYPD emergency services deputy chief Moksar, but he is ordered to return when the man on the ledge will not speak to psychiatrists summoned to the scene. Coached by a psychiatrist, Dunnigan tries to relate to the man on the ledge as one human to another.