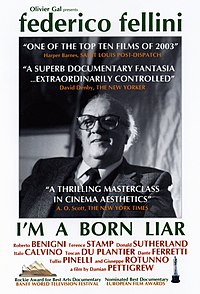 Fellini: I'm a Born Liar is a 2002 French documentary film written and directed by Damian Pettigrew. Based on Federico Fellini's last confessions filmed by Pettigrew in Rome in 1991 and 1992 (Fellini died in 1993), the film eschews straightforward biography to highlight the Italian director's unorthodox working methods, conscience, and philosophy.

A camera tracks crosswise alongside a wide, brightly appointed beach, in what appears to be the dead of winter. No bathers are in sight, only a rolling parade of empty cabanas, with a tranquil blue seascape in the distance beyond. The wistful, melancholy music of Nino Rota lends these vistas a dreamy familiarity. We then jump from color to luminous black & white, and a quick glimpse of Federico Fellini's 1963 masterpiece, 8½, in which the monumentally buxom harlot, La Saraghina, is preparing to perform her rumba on the beach for a flock of fugitive schoolboys. It's the very same beach we were just staring at, but magically denuded of 40 years of succeeding development, and made mythic through the eyes of a master.