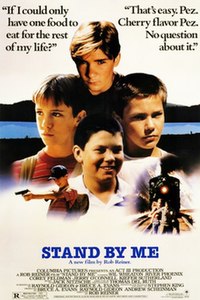 Stand by Me is a 1986 American coming-of-age film directed by Rob Reiner and based on Stephen King's 1982 novella The Body, with a title derived from Ben E. King's song. The film stars Wil Wheaton, River Phoenix, Corey Feldman, Jerry O'Connell and Kiefer Sutherland. In Stand by Me, four boys in 1959 Castle Rock, Oregon, go on a hike to find the dead body of a missing boy.

In 1985, author Gordie Lachance reads in the newspaper that his childhood best friend, Chris Chambers, has died. Gordie narrates an extended flashback, later revealed to be a story he is writing. The flashback tells of a childhood incident when he, Chris, and two buddies journeyed to find the body of a missing boy near the town of Castle Rock, Oregon during the Labor Day holiday weekend in 1959.