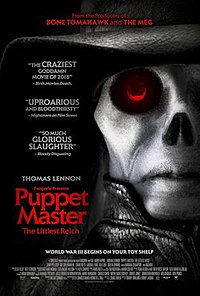 Puppet Master: The Littlest Reich is a 2018 horror comedy film directed by Sonny Laguna and Tommy Wiklund, and written by S. Craig Zahler. The film is the twelfth entry in the Puppet Master franchise, and is the first film produced by Fangoria under their "Fangoria Presents" label, following their acquisition by Cinestate. It is a reboot of the series, and stars Thomas Lennon, Jenny Pellicer, Nelson Franklin, Barbara Crampton, and Udo Kier. It was released on August 17, 2018, by RLJE Films. As of February 2019, the film has grossed over $600,000 through video sales.

In Texas of 1989, escaped Nazi war criminal Andre Toulon attempts to engage a bartender in a sexual relationship; he responds with disgust upon learning that she is a lesbian. Later that night, he induces his sentient puppets to attack and kill the woman and her lover. Rookie police officer Carol Doreski follows Toulon to his mansion, where she shoots him to death after he pulls a gun on her.