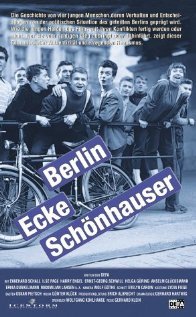 Berlin, Schoenhauser Corner is an East German crime film directed by Gerhard Klein. It was released in 1957.

Dieter, Angela, Kohle and Karl-Heinz are part of a group of delinquent youths who prowl Schönhauser Allee, in Berlin's Prenzlauer Berg. The four, each with his troubled life, are often in trouble with the police. Karl-Heinz steals an identity document and uses it to enter West Berlin, where he murders a man while committing armed robbery. The police suspect that his friends assisted him. When he returns, Kohle and Dieter confront Karl-Heinz about an unpaid debt; he threatens them both with a pistol, and Kohle knocks him unconscious. Karl-Heinz recovers and runs away. But Dieter and Kohle believe they have killed Karl-Heinz. Kohle and Dieter get assistance in fleeing to West Berlin, and stay in a home with other young men in the western sector of the city. They plan to get to the Federal Republic of Germany. Before long Dieter wonders whether Karl-Heinz is really dead, and whether it would be safe to return to East Berlin. He is threatened by some of the young men in the home where they are staying. Kohle is concerned that the two friends will be separated. He drinks a solution of coffee and tobacco to feign illness, so he can't be sent away. The next morning, Dieter discovers Kohle dead, poisoned by the beverage. Dieter returns home, where Angela awaits his child, and explains the situation to the police. He is released, while Karl-Heinz is imprisoned.